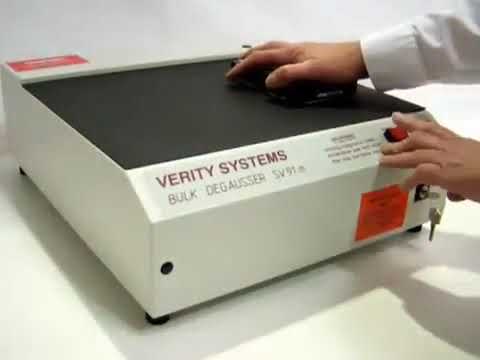 This model could be available for £11.69 per week

If you require erasure of a full array of magnetic media including high density metal drives, tapes and cassettes, then the Verity SV91M is the degausser for you. The Verity SV91M is CESG and NATO approved, taking as little as ten seconds to completely erase a cassette and 3 minutes to erase a Hard Drive. Please note that this model is also sold as the SV91 DLT/LTO and V91 HD/DLT. They are the same machines with different coloured exterior.
The Verity SV91M is simple to use and provides a thoroughly effective and low cost means of degaussing DLT, DAT and other high coercivity tape. It is also suitable for erasing PC hard drives for security purposes and the SV91M is particularly recommended for erasing defective or damaged drives where other types of erasing may not be effective. The SV91M is a low noise, manually operated unit that sets neatly on a table top and has been designed with security operations in mind, as its powerful degaussing fields can erase even metal particle tape. The SV91M is ideal for the security conscious, low volume operator who wants to have a professional, low budget solution to eliminate magnetic media security risks.
The SV91M has been NATO approved and meets the specified requirements of CESG Degaussing Standard at the Lower Level. This means any magnetic media (holding restricted or less) may be regarded as not protectively marked after being degaussed. The SV91M is subject to S(E)N 06/09 which requires all the SEAP-approved degaussers to be retested against the new CESG Degaussing Standard (at the Higher Level). At this time, the testing standard is not yet available. The SV91M may still be used to degauss magnetic media at confidential and above, but the degaussed media is subject to additional handling requirements (detailed in S(E)N 06/09).NATO Numbers: 5836-99-591-3345 (50Hz) 5836-99-500-5299 (60Hz)
The SV91M DLT/LTO security degausser has been approved by Governments and meets the specified requirements of the CESG Degausser Standard for the secure erasure and destruction of information and data stored on magnetic media up to the restricted and below level. Also meets German security approval DIN33858. NB. After degaussing some media are not reusable
 Read More   Read Less 
 Show More   Show Less 