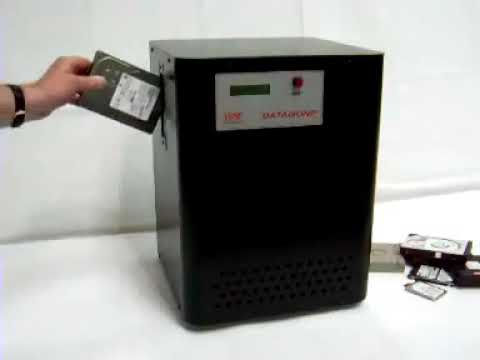 This model could be available for £25.61 per week

The Verity DATAGONE is a fully automatic Degausser for Hard Drives and Backup tapes. It uses pulse discharge technology and is fully processor controlled which enables the DATAGONE to offer a complete and secure erase on magnetic media. Media that can be degaussed includes Hard Drives that use both perpendicular and vertical recording techniques and most common backup tapes including DLT, LTO, 8mm, DDS and more. A degausser that uses capacitive discharge technology generates and stores energy in large capacitors. When the capacitors are fully stored, they release the energy to a coil that creates an intense eletromagnetic pulse. Due to the short burst of energy, the coil doesn't heat up during the degaussing process, thus allowing the degausser to have a continuous duty cycle. The release of this energy can be described as a pulse, hence some refer to capacitive discharge degaussers as "pulse degaussers."
Performance - the DATAGONE generates a powerful magnetic field and in less than a second completely erases the complete data from Hard Drives and Backup tapes. Its simple one pass fully automatic operation makes it ideal in businesses where security is of the utmost importance.
Operation - the DATAGONE is a fully automatic table top mounted unit. With the Datagone powered up the operator simply slides the hard drive into the aperture on the left hand side of the unit. The unit senses the presence of the media and the degauss cycle starts automatically. No operator action is required. When the degauss cycle is complete, the hard drive is released and exits from the degausser on the right hand side. Throughout the entire degauss cycle the onboard processor monitors the procedure and progress messages are displayed on the LCD panel. If the degauss cycle is interrupted for any reason such as power loss or any fault condition, the media is retained in the DATAGONE and the operator is immediately alerted to the interruption in the erasure cycle on the LCD panel. To eject media when the cycle has failed for any reason the operator has to press the reset button. This releases the Hard Drive or Tape and resets the degauss cycle. The operator should then attempt a repeat erasure. The entire erasure process takes approximately 8 seconds.
Key Features include a Single Pass Fully Automatic Operation capable of the complete erasure of over 250 Drives and Tapes per hour. The Datagone Degausser uses a Processor Controlled Operation for the failsafe erasure of Longitudinal and Perpendicular Hard Drives. Supplied with FREE lifetime technical support and available with an optional Transport Case.
 Read More   Read Less 
 Show More   Show Less 